Online casino software developers seldom rest on their laurels. Every week, new online slots make their debut at casino sites. Some offer up Irish luck themes and others Ancient Egyptian ones. Some, though, are destined to be more popular than others, on the basis that they are branded slots. Two of those made their debut at top casino sites this week.

These slots always prove popular, as their themes are generally based on top brands. Officially licensed games will naturally lure in anybody who is a fan of their brand, and there is, therefore, high hope for two new slots which launched this week, Nitro Circus and Who Wants to be a Millionaire.

So, Who Wants to be a Millionaire? 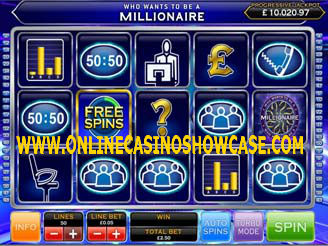 First up, Big Time Gaming (BTG) have launched their Who Wants to be a Millionaire slot, at least exclusively at just a handful of casinos.

The game – based on the hit UK quiz show of the same name – is currently in the midst of an timed launch, and only a few top sites are currently able to offer you the game. However, with a formal release date of November 28 penned, it won’t be long before everyone can give it a crack.

This 6-reel slot utilises Big Time Gaming’s Megaways reel structure, which means that at times there can be as many as 117,649 ways to win present on the reels. Nobody is going to grumble at that, especially with a 20p minimum bet, and collapsing reels available.

The highlight of the new game, though, is its free spin bonus. After triggering the bonus round, players will get to gamble the number of spins they are given by selecting options A, B, C or D (just like in the show). Players also have a number of lifelines to help them out.

By working their way up the ladder (similar to how a contestant on the show works their way up the rungs for cash) players can win a greater number of spins. It may not have a million pounds to offer players (the jackpot is non-progressive and fixed at 32,720 coins) but few would argue that this branded slot is well worth a look this week.

Also debuting is Yggdrasil Gaming’s new branded slot, Nitro Circus. Launched this week, the game is themed on the nut job motorcycle stunt crew that call themselves the Nitro Circus. This branded slot offers 5 reels and 25 lines of action, and standard stakes. However, there is nothing standard about the game’s features. These include:

If you like adrenaline pumping music, plenty of features and original, branded themes in your slots, Nitro Circus could be for you.

Branded slots always tend to do rather well in the casino world, and with two brand new titles for you to choose from, it is shaping up to be a great weekend for players at casino sites across the net.