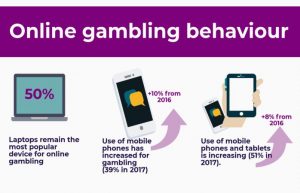 Online gambling in the UK is continuing its success, according to the latest market statistics from the UK Gambling Commission (UKGC). As revealed in the UKGC’s Gambling Participation Report 2017, online casinos are still a popular past time for British punters.  The mobile gambling sector is even more promising and has continued its fast rise in 2017.

In its latest biannual report, the UKGC shows that general gambling participation has dropped down by 3% since 2016. But while overall participation dropped to 42% last year, online gambling in the UK retained its strong position. According to the latest numbers, the online participation rate stayed at 14% in 2017, just like in 2016.

During 2017, online casinos accounted for a large percentage of the remote gambling revenues reported to the UKGC. Holding a 56% market share by gambling revenue, online casinos generated £2.6 billion in GGY (Gross Gambling Yield) between April 2016 and March 2017. Out of these numbers, £1.7 billion was generated by online slots and £414 million were contributed by online table games.

Mobile Gambling On the Rise

Confirming the trend of players going mobile, the Gambling Participation Report showed that mobile gambling is on the rise.  According to the data, the mobile engagement rate was 43% in 2016. But a year later, the use of mobile phones for online gambling in the UK spiked to 51%. Contributing to the growth was the use of smartphones in gambling, which increased from 29% to 39% in 2017.